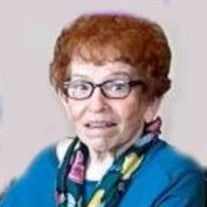 Fort Worth, Texas - Rosalie Lasser Weinberg died Monday morning, September 13, 2021, two days before her 85th birthday. Following a Service at the Grave on Wednesday, September 15, in Ahavath Sholom Cemetery, she was laid to rest next to her husband, Joe. Rabbi Andrew Bloom and Hazzan Jeffrey Weber officiated at the service. A resident of Fort Worth for most of her adult life, Rosalie was born in Houston, the daughter of Jack and Yetta Dena Ass Lasser. She graduated from San Jacinto High School in Houston before marrying her husband of 55 years, Joseph, and moving to Fort Worth. Later in life, she worked in retail positions at both Swensen’s Ice Cream and Kmart as well as with her husband and son, Michael, at their family business, M & J Steel. Rosalie loved TCU, the Dallas Cowboys, and the Dallas Mavericks, following the teams’ games on a regular basis, and she enjoyed playing Mahjong, bingo, and other board games with friends. She was a member of Congregation Ahavath Sholom, its Ladies’ Auxiliary (and a former president), and the B'nai B'rith, in which she served as a youth advisor. In addition to her children, Debbie Weinberg Pfister and Jeff Weinberg, Rosalie is survived by her grandchildren, Jason Pfister, Todd Pfister, Jadrian Grimes, and Callan Weinberg; and great-grandchildren, Eleanor Emmeline and Brady Grimes. Memorials: In lieu of flowers, consideration of contributions to Congregation Ahavath Sholom or to a charity of one's choice, honoring Rosalie's memory, is suggested. To send flowers or a memorial gift to the family of Mrs. ROSALIE LASSER WEINBERG please visit our Sympathy Store.
To order memorial trees or send flowers to the family in memory of Mrs. ROSALIE LASSER WEINBERG, please visit our flower store.