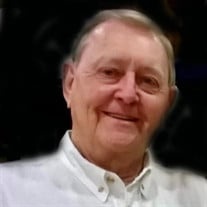 Fort Worth, Texas - Sammy Randal "Sam" Day passed away unexpectedly on Friday morning, January 28, 2022. He was 79. A Memorial Service will be held at 1 pm, Friday, February 11, in the Sanctuary of First Presbyterian Church, 1000 Penn Street. Masks are required while in the church. Sam, always the consummate host, requested that we enjoy a "Big Party," so we will honor his wishes with a Celebration of His Life, following the service, at Colonial Country Club, 3735 Country Club Circle. Sam, a member of First Presbyterian Church for 56 years, was a loving husband and an inspirational role model for his children as well as for many people in Fort Worth where he was a respected business leader. One of his most prominent guiding principles was, "If you can't say anything nice about someone, don't say anything at all." He followed that principle throughout his life. Born in a small hospital in Lampasas, Sam was the son of William A. Day and Ruth Maxwell Day, who both preceded him in death. He was an only child. When he was young, the family moved to Fort Worth where his parents owned a grocery store on White Settlement Road. Sam worked at the grocery store in his youth. He attended Mary Louise Phillips Elementary, Monnig Middle School and Arlington Heights High School. At Arlington Heights, Sam played basketball and football, and served as class president. After graduating from Heights, Sam attended TCU where he met the love of his life, Manning Robinson, whom he married on January 29, 1965. He passed away one day before their 57th wedding anniversary. Sam and Manning had two children, Jeffrey William, born in 1967, and Rebecca Suzanne, born in 1971. Nothing gave him as much pride and joy as his two children. At TCU, Sam graduated with a Bachelor of Business Administration in Accounting in 1965. He was a member of Phi Kappa Sigma fraternity and was a pledge class officer. He was a dedicated supporter of Phi Kappa Sigma Beta Theta Chapter until his passing. After graduating from TCU, Sam started his career in Houston at Tenneco Oil Company in the accounting department. His career path led him back to Fort Worth when he joined General Dynamics' payroll department where he and his TCU friend and fraternity brother, Darrell Lester, wrote and designed a new payroll system for GD. In the early 1970's, Sam joined Arthur Young & Company where he earned his CPA designation. In the mid 70's, he joined Nowlin Mortgage Company as the President. During this time, he served as the youngest president of both Nowlin Mortgage and the National Bankers Mortgage Association. Sam left Nowlin Mortgage in the early 80's to start his own commercial real estate development company. In 1984, Sam, Jim Norman, and Darrell Lester created Norman, Lester, Day. In the late 1980's, Sam and Darrell started Centra Group, LLC, a real estate brokerage and property management firm. Centra Group merged with Asset Partners, LLC in Houston in 1997. The company changed its name to Centra Asset Partners, LLC and Sam, Darrell, Dusty Wolf and Tina Cavaco launched a 25-year business and personal relationship that is still strong today. The company changed its name and is now known as Centra Partners, LLC. He and Darrell retired from Centra in 2019. Sam joined Colonial Country Club in the 1960's. Sam had a passion for service as a member of Colonial where he enjoyed friendships that lasted almost 60 years. Early on, he played tennis, but later took up the game of golf which he played weekly with close friends until his passing. Sam served as President of Colonial Country Club, Tournament Chairman, on the Tournament Committee, as a member of the Board of Directors and was inducted into the Pride of the Plaid. He took great pride in wearing his plaid jacket. He was a devoted TCU fan and spent countless hours attending TCU football, basketball, and baseball games. Sam and Manning held season tickets for 40 years with many trips to TCU bowl games with their friends and family, always displaying their Horned Frog pride. Sam was passionate about history, reading, travel, sports, fishing and investing. His family and friends were blessed for so many years having Sam as a husband, father, uncle, and friend. He was a true gentleman with a servant's heart. His light will live on in the people who knew and loved him. In addition to his wife, Manning, Sam is survived by his children, Jeff and Becky; step-sister, Jo Brown; cousins, Janie Potts and Theresa Black; niece, Laurie Waters; and nephew, Pete Bacon. Memorials: In lieu of flowers, contributions to two endowed scholarships established by Sam and his family are suggested: TCU-School of Medicine Endowed Scholarship for Physicians Leaders – This scholarship enables medical students to receive an education at TCU and the UT Health Science Center. TCU-The Distinguished Accounting Scholar Endowed Fellowship – Graduate financial aid awards are based solely on merit with first consideration to students with the best qualifications. The award will be given to a student in the Master of Accounting Program in the Neeley School of Business on the basis of academic achievement as the primary consideration. Gifts may be mailed to: Office of the University Advancement, TCU Box 297044, Fort Worth, TX 76129. To send flowers or a memorial gift to the family of Mr. SAMMY RANDAL "Sam" DAY please visit our Sympathy Store.
To order memorial trees or send flowers to the family in memory of SAMMY RANDAL "Sam" DAY, please visit our flower store.