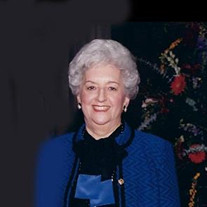 FORT WORTH -- Sara Betty Label Gilbert, passed away peacefully Wednesday evening, April 4, 2017, nine days after her 99th birthday. A beloved mother, grandmother and great-grandmother, she had remained healthy, joyful, congenial, warm and loving before suffering a massive stroke. Services: Following a committal service at 2 p.m. Thursday in the Beth-El Section of Greenwood Memorial Park, Sara Betty will be laid to rest next to her husband, Ben. A memorial service will be held at 3:30 p.m. Thursday at Beth-El Congregation, 4900 Briarhaven Road, with Rabbi Brian Zimmerman officiating. Rabbi Ralph Mecklenburger will offer the eulogy. A memorial reception and Minyan service will be held at the Temple following the service. Memorials: In lieu of flowers, consideration of contributions to Beth-El Congregation, Jewish Family Services or a charity of choice, in her memory, is suggested. A third-generation Texan, Mrs. Gilbert’s ancestors were among the city’s early Jewish settlers, with one of her grandfathers, Ben Levenson, a founding member of Fort Worth’s first synagogue in 1892. Born March 26, 1918 in Terrell, Sara Betty was the oldest of three children. Her parents were Ben and Rose Levenson Label, clothing merchants who operated Label’s Department Store. She graduated from Terrell High School and for the next two years attended the University of Texas at Austin, where she was a Bluebonnet Belle. In 1940, she moved to Fort Worth where soon after, she met and fell in love with Ben Gilbert, an up-and-coming attorney five years her senior. The couple married in her Terrell home on February 9, 1941; the couple were married more than 54 years before Ben’s death in 1996. Ten months later, America entered the Second World War. Ben and his three brothers joined the military, Sara Betty became a Red Cross volunteer and moved in with her in-laws, Rose and Max Gilbert. She was a great comfort to them when their youngest son, Harold, was killed on Christmas Day 1944. Soft spoken, lovely, modest and diplomatic, Mrs. Gilbert participated in a multitude of civic organizations yet shied away from the spotlight. She was supportive of her husband when he was president of Beth-El Congregation and the Tarrant County Bar Association. She was always there for her sons, Burton and Andy, whether as Cub Scout leader, den mother, PTA parent, or carpooling mom. She was a longtime member of Beth-El Congregation, the National Council of Jewish Women, Women of Reform Judaism, Hadassah, Fort Worth Lawyers Wives, and the Symphony Society. She was preceded in death by her parents; husband of 54 years, Ben; her brother, Sam; and brothers-in-law, Harold, Sol and Leroy Gilbert. Survivors: In addition to her two sons and their wives, Burton and Cynthia Gilbert of Fort Worth and Andy and Rosie Gilbert of Austin, Sara Betty was “Mimi” to her grandchildren, Natalia and Michael Gilbert of New York, and Lauren and Houdi Epstein of Arlington; three great-granddaughters, Alexandra and Blair Gilbert and Leah Rose Epstein; sister, Florian Label Shwarts of Scottsdale, Arizona; numerous relatives and countless friends. To send flowers or a memorial gift to the family of Mrs. SARA BETTY LABEL GILBERT please visit our Sympathy Store.
To order memorial trees or send flowers to the family in memory of Mrs. SARA BETTY LABEL GILBERT, please visit our flower store.