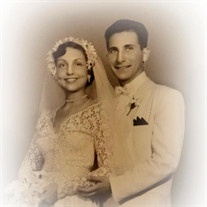 FORT WORTH – Theodore Israel “Ted” Hoffman passed away Saturday morning, March 3, 2018. Mr. Hoffman was 87. SERVICE: 1 p.m. Wednesday in the Barnett Sanctuary of Congregation Ahavath Sholom, 4050 S. Hulen Street. Following committal prayers, he will be laid to rest in the Beth-El Section of Greenwood Memorial Park. MEMORIALS: For religious reasons, the family respectfully requests that no flowers be sent. However, consideration of contributions to Congregation Ahavath Sholom or to Beth-El Congregation, in his memory, is suggested. Ted’s stoic stature and nurturing nature were never in conflict with each other. He seamlessly had an affection, coupled with a deep connection, to tradition and faith. Ted was a man who impacted the lives of many. From his days at the temple as a youth advisor, his invaluable efforts at Lockheed Martin, and his unyielding devotion to his wife, Rita, with the wisdom and guidance that helped so many people. SURVIVORS: In addition to his wife, Rita, Ted is survived by his daughters, Alyce Hoffman Alter and Tami Hoffman; he was grandfather to Grant Alter, Blake Alter and Rhiannon, Joseph Lincecum and Christina, Elisabeth Lincecum, Ian Jara and Andrew Jara; great-grandfather of Maddox, Sophia, William, Graham and Jackson; brother of Elvin Hoffman and Isabel Feldman; and uncle of nieces and nephews and their families. To send flowers or a memorial gift to the family of Mr. THEODORE ISRAEL "Ted" HOFFMAN please visit our Sympathy Store.
To order memorial trees or send flowers to the family in memory of Mr. THEODORE ISRAEL "Ted" HOFFMAN, please visit our flower store.