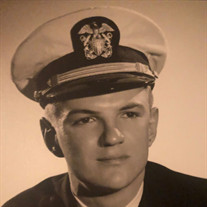 FORT WORTH – Vernie George Runnion Jr. passed away peacefully early Monday morning, December 9, 2019. Mr. Runnion was 94. SERVICE: A celebration of his life will be held at 2 p.m. Friday in the Sanctuary of University Christian Church, 2720 S. University Drive, with a reception to follow. He will be laid to rest privately in Greenwood Memorial Park. MEMORIALS: In lieu of flowers, consideration of contributions to a charity of choice, in his memory, is suggested. Born December 29, 1924 in Greenville, George was the only child of Vernie George and Mary Elizabeth Virginia Inness Runnion. The family moved to Fort Worth in 1940 where his father was employed by Kimbell Milling Company. After graduating from R. L. Paschal High School in 1942 and Texas Christian University in 1948, George served as a U. S. Navy communications officer on a Sub + chaser in the Pacific during World War II. A Certified Public Accountant, he was a member of the American Institute of Certified Public Accountants and founder of the firm Runnion, Anderson & Feik. George served on the board of Sturt Bacon Advertising and the Key School. His memberships also included Southside Lodge #114, A.F. & A.M., Moslah Temple Shrine Patrol, the Royal Order of Jesters, Court #32, the TCU Frog Club and The Clarke Society. He was president of Rotary Club South, a long-time member of Colonial Country Club and an active member of the Breakfast Club of Fort Worth. George was a Deacon, Elder and Trustee of University Christian Church where, with his beloved wife, Rosemary, both were active members since October 14, 1951, the year of their marriage. Together, they joined the church on the same day as Ken and Cherry Garrett and Doris and Ralph Runnion. He was never happier than when he drove his “Red Mustang Convertible” around his beloved Fort Worth! SURVIVORS: In addition to his wife, Rosemary, George is survived by his son, John Stewart Runnion; daughter and her husband, Elizabeth Kelso “Kelly” Runnion Feik and Britt; and his grandchildren, Meagan Elizabeth Feik and Britt Colin Feik and his wife, Katherine. To send flowers or a memorial gift to the family of Mr. VERNIE GEORGE RUNNION Jr. please visit our Sympathy Store.
To order memorial trees or send flowers to the family in memory of Mr. VERNIE GEORGE RUNNION Jr., please visit our flower store.
Send a Sympathy Card