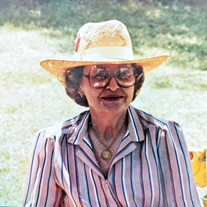 CROWLEY -- Virginia Juanita Granger Hart passed away peacefully Tuesday morning, February 6, 2017. Mrs. Hart was 96. SERVICE: A service at the grave will be held at 2 p.m. Friday in Crowley Cemetery. The Rev. Kim Long, pastor of the First United Methodist Church of Alvarado, will officiate. Following the service, she will be laid to rest next to husband, Howard, in the cemetery. Born April 15, 1921 in Fort Worth, Juanita was the daughter of John Raymond and Virginia Constance Estes Granger. She grew up on the city's near south side and was baptized at Travis Avenue Baptist Church. After attending E. M. Daggett, she graduated from Central High School, now R. L. Paschal. Juanita married Howard Hillery Hart in April of 1938. They lived in Fort Worth and Judibana Venezuela, S.A. before retiring to land west of Crowley. During World War II, Juanita worked at Consolidated Vultee Aircraft at the time they were manufacturing the B-24 Liberator heavy bomber. After the war, she occupied her time as a homemaker, mother and Cub Scouts of America den mother. She was also very active in local garden clubs, flower shows and the P.T.A. Juanita enjoyed reading, crossword puzzles and listening to classical music during her down time. She was preceded in death by her parents, husband and brother, John R. Granger Jr. SURIVIVORS: In addition to her son, John Howard and his wife, Mary, Juanita was grandmother to her granddaughter, Hillery J. Hart and her husband, Jarrett Hook; and great-grandmother of Aidan. To send flowers or a memorial gift to the family of Mrs. VIRGINIA JUANITA GRANGER HART please visit our Sympathy Store.
To order memorial trees or send flowers to the family in memory of Mrs. VIRGINIA JUANITA GRANGER HART, please visit our flower store.
Send a Sympathy Card