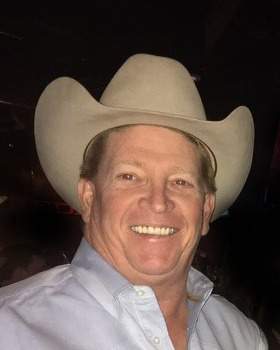 Family and friends will gather from 5 to 7 pm Thursday, September 8, in the Great Room at Robertson Mueller Harper.  A Celebration of His Life will be held at 11 am Friday, September 9, at Willow Park Baptist Church, 129 S. Ranch House Road, Willow Park with the service being livestreamed from the church’s website, willowparkbaptist.org.

Born and raised in Lamesa, Texas, Wesley graduated from Lamesa High School in 1983 before attending and graduating from Weatherford Junior College.  He moved to the Fort Worth area in 1985 where he spent the rest of his life.

Wesley was the owner of Renovation Systems and was a major stock holder and CEO for Championship Bull Riding for the past 15 years.  He was a member of Willow Park Baptist Church and knew Jesus Christ as his Savior.

An avid golfer, Wesley enjoyed the outdoors, watching old western movies, traveling and golf trips with his buddies.  He loved Port Aransas and planned to retire there in the coming years.  Wesley lived life to its fullest and will be deeply missed by all who knew and loved him.

He was preceded in death by his father, Bobby Bruce.

Memorials:  In lieu of flowers, his family suggests consideration of contributions to the Justincowboycrisisfund.com, in his memory.

To order memorial trees or send flowers to the family in memory of WESLEY DWAYNE BRUCE, please visit our flower store.