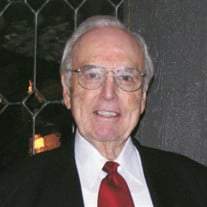 Fort Worth, Texas - Rev. William Rex Kimbrough went home to the Lord on December 14, 2021. He was 96. A Celebration of His Life will be held at 2 pm Saturday, February 26, at Westminster Presbyterian Church, 7001 Trail Lake Drive. Bill was born in Detroit, Michigan to Melvin and Clarice Goin Kimbrough. A resident of Fort Worth since 1968, Bill proudly considered himself a true Texan, declaring he would have been a 4th generation Texan had his parents never moved. Bill was a man of integrity and compassion, a man of action, service, intellect and grace. Faith to him meant using his heart, his soul and his mind. His smile exuded kindness and his life exemplified purpose. He joyfully filled a room with music, singing and playing his favorite tunes on the piano. A loving and devoted husband, father, and grandfather; a blessing to all that knew him. Bill graduated from high school in Walled Lake, Michigan and began his studies at Taylor University in Upland, Indiana. Soon he was drafted into the United States Navy during WWII where he served as a Corpsman until his discharge in 1946. Bill graduated from Taylor University with a major in Zoology and minor in Music, but his experience in the South Pacific helped to solidify his calling to the ministry. He moved to Chicago to attend McCormick Theological Seminary and began his ministry as a student at Argenta Presbyterian Church in Illinois. A fellow classmate and student pastor at the neighboring church, introduced Bill to one of his parishioners who was a math teacher at the local high school. Bill and Virginia Hughes married on March 29, 1952. That same year, Bill graduated from seminary and stayed on as pastor until 1954. Bill served two more presbyterian churches in Illinois spanning 14 years. It was at this time that he and Virginia grew their family, blessed with the births of their four children. In 1968, Pastor Bill was called to his last parish at Hemphill Presbyterian Church (HPC) in Fort Worth, Texas where he remained until his retirement. During his 23-year tenure there, he implemented and facilitated many church-supported programs that favorably impacted the community, including: The Fort Worth Girl's Club which was started at HPC, with as many as 500 girls attending the program in the summer; BREAD BASKET MINISTRIES was initiated in the neighborhood. Pastor Bill was on the first board of directors and his was one of the first churches to support this program of direct assistance to provide food and clothing to those in need; South Central Alliance of Churches was organized in the neighborhood to provide counseling and direct aid to those in need; a GED program was started at HPC, tutoring students so they could pass the test to get their high school diploma; a job counseling program was started for Spanish speaking people of the neighborhood to help them get jobs; Suicide Prevention telephone service was supported by Pastor Bill and several members of the congregation; and WIC was held at HPC and met each week to provide nutritional care for mothers and their children. Pastor Bill retired from the ministry in June of 1991. His congregants at Hemphill and the presbytery bestowed upon him the honor of Pastor Emeritus. Bill also served a myriad of duties and stations in the United States Naval Reserve Chaplain Corps during his secondary career, retiring with the rank of Commander in 1985. After 42 years in the ministry and 31 years in the navy, Bill felt he had fulfilled his duty to God and to his country. Six months after his retirement and 40 years since they’d married, Virginia passed away. In time, a mutual friend played matchmaker and Bill and Ruth Ghormley were married on August 13, 1994. They enjoyed ballroom dancing and travelling together, and for over a decade, they volunteered as Ombudsman at a senior living community. Bill also worked with Habitat for Humanity, “retiring” upon the completion of construction on his 200th house at the age of 80. They were married for 27 years Bill was preceded in death by his parents, wife, Virginia Hughes Kimbrough, his brothers, Clifton Kimbrough and James Kimbrough and sister Betty Ann Kimbrough. In addition to his wife, Ruth Ghormley Kimbrough, Bill is survived by his four children, John Kimbrough, Fort Worth, Mary Kimbrough, Dallas, Martha Kimbrough Fogleman (Mike)Greensboro, NC, Jim Kimbrough, Fort Worth; his three grandchildren, Stephen Kimbrough (Julia), Euerdorf, Germany, Elizabeth Fogleman, Atlanta, GA, and Nick Fogleman, Memphis, TN. Bill is also survived by Ruth’s four children, 11 grandchildren and 13 great-grandchildren. One of Bill’s favorite hymns was “Christ of the Upward Way”. In his own words: “I hope that I have been an able and faithful servant of Christ and have done what the words of this hymn so adequately state.” And when Thy last call comes serene and clear, Calm may my answer be, Lord I am here. AMEN. To send flowers or a memorial gift to the family of Rev. WILLIAM REX KIMBROUGH please visit our Sympathy Store.
To order memorial trees or send flowers to the family in memory of Rev. WILLIAM REX KIMBROUGH, please visit our flower store.